A Wisconsin native, Richard Kalinoski has distinguished himself as a playwright by writing plays with great international appeal. His full-length play, Beast on the Moon, won the 2001 Best Play from the Repertory prize at the Molière Awards in Paris.

Indeed, since emerging as a “triumph” (Ben Brantley, The New York Times) at the 1995 Humana Festival, Beast on the Moon has been translated into 20 languages and produced in venues all over the world, including Athens, Brussels, London, Moscow, New York (off-Broadway), Prague, Sao Paolo, and Toronto. It has garnered a host of awards including the Osborn – Best New Play in America by an Emerging Playwright, awarded by the American Theatre Critics Association in 1996, and in 2001, five Ace Awards, including Best Play, in Buenos Aires, Argentina.

In 2005, President of Armenia Robert Kachadarian awarded Kalinoski the Khorenatsi Medal for contribution to the Arts from the country of Armenia.

Mr. Kalinoski’s recent plays include Front Room (read at Next Act Theatre, Milwaukee); My Genius of Humanity (commissioned by the theatre program at California State University, Fresno); The Boy Inside (university production in 2015); and A Bear in Winter.

Kalinoski has a BA from the University of Wisconsin Whitewater  and an MFA from Carnegie-Mellon University. He studied film at the American Film Institute. 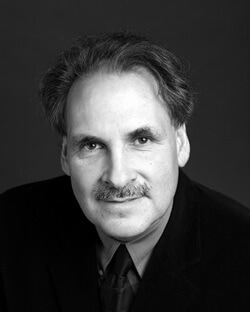