R. Eric Thomas won the Barrymore Award for Best New Play, the Dramatist Guild Lanford Wilson Award and was a finalist for the Steinberg/ATCA New Play Award. He is the recipient of a 2017/2018 National New Play Network Commission and has been commissioned or produced by Arden Theater Company, Simpatico Theater, Azuka Theater, Single Carrot Theater, About Face Theater, City Theater Miami, Act II Playhouse and more.

He is also the long-running host of The Moth in Philadelphia and Washington D.C. as well as a senior staff writer for Elle.com, where he writes “Eric Reads the News,” a daily current events and culture column with hundreds of thousands of monthly readers.

He is at work on his debut memoir-in-essays, entitled “Here for It,” which will be published by Ballantine Books in 2020. Recent productions include Mrs.Harrison (Azuka Theater, Barrymore nomination – Best New Play); Miriam1234 (City Theater Miami) and Time Is On Our Side (About Face Theater & Simpatico Theater). He is an alumnus of The Foundry and was a 2018-19 Ingram New Works Fellow. 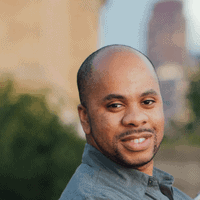