Miriam A. Laube’s most recent roles at Oregon Shakespeare Festival were Circe, Ensemble in The Odyssey. In 14 seasons there, other roles included Paulina and Hermione in The Winter’s Tale; Ventidius, Varro, Senator in Timon of Athens; Cleopatra in Antony and Cleopatra; Gynecia in Head Over Heels; Witch in Into the Woods (OSF, Wallis Annenberg Center); Mrs. Pearce, Ensemble in My FairLady; Medea in Medea/Macbeth/Cinderella; Maruca in Party People; Miss Ritter in She Loves Me; Olivia in Twelfth Night; Vasantasena in The Clay Cart; Adriana in The Comedy of Errors; Rosalind in As You Like It; Viola Luthy in Tracy’s Tiger; and Cordelia in King Lear.

Recent credits include Barbara Fawcett in The Constant Wife; Elizabeth Condell, Emilia Bassano Lanier in The Book of Will (Denver Center); and Judy Boone in The Curious Incident of the Dog in the Nighttime (Mixed Blood Theatre, MN). Other credits include Mumtaz/Chaiyya soloist in Bombay Dreams on Broadway; Marina in Pericles (The Public Theater); Titania in A Midsummer Night’s Dream (Virginia Stage Company) and Cassandra in Agamemnon (Aquila Theatre).

For Ashland New Plays Festival, she played Teresa in Fernando (2011) and Fia Sorento in Sleeping Dogs (2013). 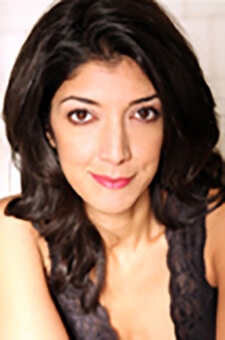