Aurelia Grierson is an Acting Company Trainee for the 2019 Oregon Shakespeare Festival season, where she is the understudy for the roles of Alice in Alice in Wonderland and The Female Ingenue (Rifkele and Ensemble) in Indecent. Other credits include Margaret in Horse Girls (Ars Nova); Beatrice/Venus/Elizabeth in Shakespeare’s Other Women; Colleen in Mr. Burns, a Post-Electric Play; Agnes in She Kills Monsters, Gilgamesh in The Epic of Gilgamesh; Martha in The Secret Garden; Musician in The Resistible Rise of Arturo Ui (SOU); Trevor in The Spinning Heart; and Fairy Queen in Full Moon Hotel (Smock Alley Theatre, Dublin). Aurelia is a BFA candidate in performance at Southern Oregon University and attended The Gaiety School of Acting, Dublin. 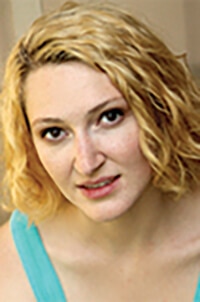